We all love the idea of being recognized as victorious for whatever reason. Whether you’ve accomplished something great in your profession, helped win the big game for your team, or achieved a goal that deserves to go down in history, the trophy that serves as a symbol makes it all the sweeter. To go even further, does the design of a major award help make it even better? For the soccer teams that go after Austin, TX’s fighting armadillo trophy, that certainly seems to be the case. 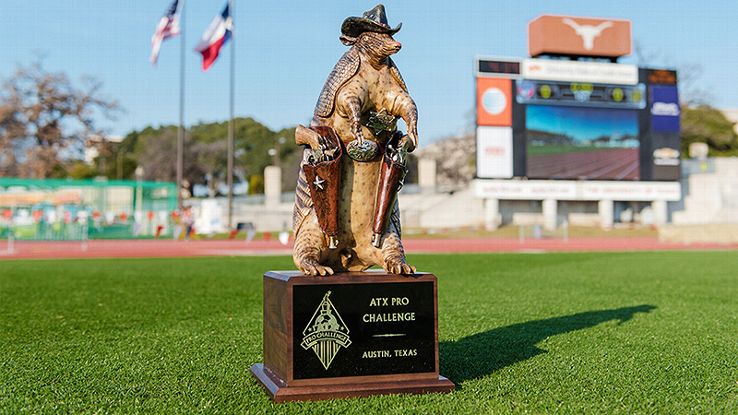 “There was no lightbulb moment when it came to the armadillo trophy. As any visitor to Austin will tell you, when you stroll past the souvenir shops on Sixth Street, you can buy just about anything armadillo-related. It’s a creature that calls the Central Texas area home and often can be seen waddling about along state highways. For [director of marketing of the Austin Aztex, Jeff] Burns, there was no hesitation that an armadillo trophy would make teams try that much harder on game day. ‘Other tournaments have cups and plates, but we felt teams would really subscribe to fighting for an armadillo,’ he said. ‘It reeks of Texas. When we had the opportunity to make it a pistol-wearing armadillo with a cowboy hat, there was no way we could say no to that. I mean, who doesn’t want an armadillo in their trophy case?”

For anyone who has seen the Austin armadillo soccer trophy, unique is just one way to describe it, but who would have thought such an unusual design would have such a powerful effect on players and fans alike. Its recognizable and memorable qualities seem to be equal parts curiosity and symbolism. For many in Austin, there’s no better symbol for Texas, and for soccer fans, there’s no better trophy to claim for the preseason.

Have you ever played for a trophy that actually made a game feel like more than just another game? What do you think about the look of the Austin armadillo?